The Winning Design of the 2013 Falken Tire Livery Contest 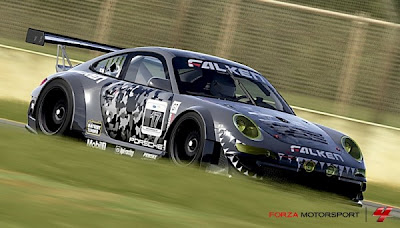 Earlier this year during the month of April, Turn 10 Studios (known as the makers of Forza Motorsports) and Falken Tire put on a contest for the XBOX Forza 4 gaming community. This gave great opportunity for gamers to collaborate with and take part in the Porsche scene without needing to afford a Porsche! This was effectively done by requesting Forza 4 gamers to submit a sport design for a Porsche GT3 RSR. Around 200 designs were submitted and only 6 were chosen by the judges from Microsoft Turn 10 and Falken Tire’s staff.  To be considered by the judges, the design had to include logos by Falken partners: Sparco, Battery Tender, HPI Racing, Forza Motorsports, and Penske Shocks. The final 6 chosen were posted on Facebook for fans to vote on their favorite creation.

Kevin Neuville from Belgium was announced the winner of the competition on July 15.   This October the winning grey GT3 designed with a shark mouth on the front end will be displayed at the 2013 Petit Le Mans race in Georgia. Following that, Neuville’s creation will then be showcased in Las Vegas during November at SEMA. If you wish to download his design through Falken’s Official Forza Motorsports’ account, it will be available for free later this year. 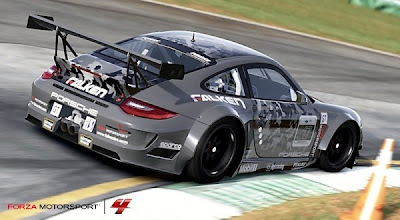 Though camouflage might not be everyone’s cup of tea, you’ve got to admit the car still looks pretty darn neat. Think…  at least it wasn’t cheetah print.

Credits to http://flatsixes.com/porsche-culture/porsche-contests/falken-tire-livery-contest-winner/
Posted by Unknown at 4:47 PM