The Million Mile Porsche Once was Lost, But Now is Found

Last week a 1964 Porsche 356C Coupe was stolen in San Pedro, CA. The owner was Guy Newmark, whose car was featured as the "Million Mile" car in the August issue of 356 Registry Magazine (found on pages 38 and 39). 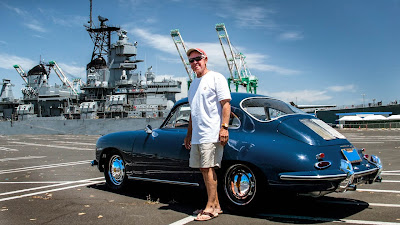 Guy posted a forum on the 356 Registry website, and from there many more people spread the news. Articles reporting the missing coupe were found online on 356 Registry and Petrolicious, while numerous Porsche and non-Porsche car forums extended the help announcing the news. Dialogues on the forums flourished.


Putting 980k miles on a car is not easy and the emotional bond between the will be hard to replace. I hope the guy finds it
-Zilvia Member

The guy has owned it for over 40 YEARS.....This makes me sad. It's like losing a kid, no joke.
Bimmer Member

That's disgusting. Somebody behind this theft is really sick.
-Rennlist Member

Just this morning I received an update via San Garbiel Valley Region PCA Updates and the thread on 356 Talk saying that the car has been found. Guy Newmark's girlfriend (Jill) posted:


Gentlemen, there is a good ending.
They found "Blue"!
I cannot say how thankful I am to all of the people who spread the word! A woman saw a post from the internet and recognized the car sitting in a park. The wiring under the dash is all ripped out - the idiots who stole it couldn't figure out how to hotwire it (thank God!). The police have surrounded it and hopefully can get these idiots off the street. THANK YOU! THANK YOU! THANK YOU! [...] Happy, happy days! Blue will be spending a bit of time at the shop then will be moved to a fortified parking facility for "special" cars. The police found some useable prints... cross your fingers.
Thanks to every one.

Incredibly, this car was recovered in only a matter of days. It's great to see all the care and support that the car community has put in. What's so great about being in a Porsche community, or even a community of people that own classy cars, is that most persons have a genuine concern for almost any person with a loss of such a precious and prestigious automobile worth all the earnest hard work, time, and costs.