Installing A Center Radiator On Your 981 Boxster/Cayman - Part 2: Flushing Your Cooling System And Installing The Radiator

When you remove your front bumper, this is what you're left with:

Or at least for us, this is what we have going on behind the bumper. What may be lurking behind your 981's face depends on what options you have. As our Cayman S came equipped with PDK and the adaptive cruise control, our side radiators have the "open" ducts that channel air from the front trim piece that clicks into a frame attached to the bumper and surrounds the PAS radar sensor. 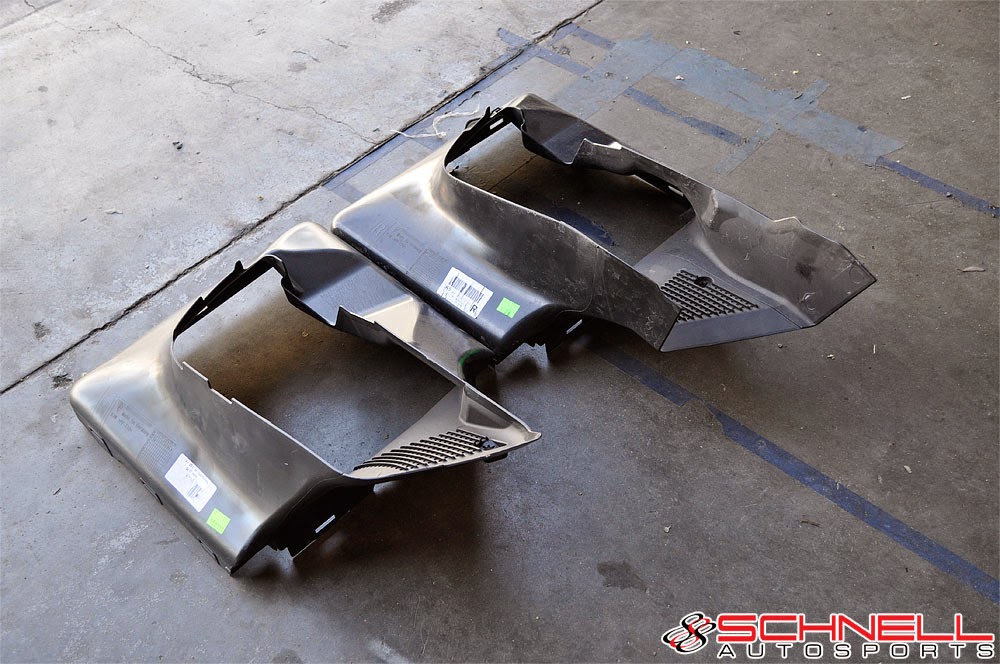 Before worrying about all that though, you'll first want to drain your cooling system so that you can attach the center radiator.

First, remove the ducting on both side radiators to expose the plugs you will need to pull to empty them of coolant. They are only held in place by clips, so disengage the clips from the slots on the ducts and pull the ducts off. On the passenger side duct, you will have to disconnect the temperature sensor before you are able to remove the duct completely from the car. Now would also be a good time to clean off all the dirt/dead bugs that have accumulated under the ducting on your radiators (especially in the outside bottom corners), and inspect for general damage.

The plugs on the radiators are held in place with a c-clip, and once that clip is removed, the plug can then just be pulled out. Make sure you have a container to catch the coolant positioned under the plug, because once the plug is removed, whatever coolant in the radiators will dump out quickly.


Underneath the car, there is a drain plug that you need to undo to remove more coolant from the lines. We also had better results when we detached the rubber coolant hoses that were going to the same junction that the drain plug is in, as due to the nature of the vehicle being mid-engined, there is a significant amount of coolant in just the hoses that run underneath the car alone. 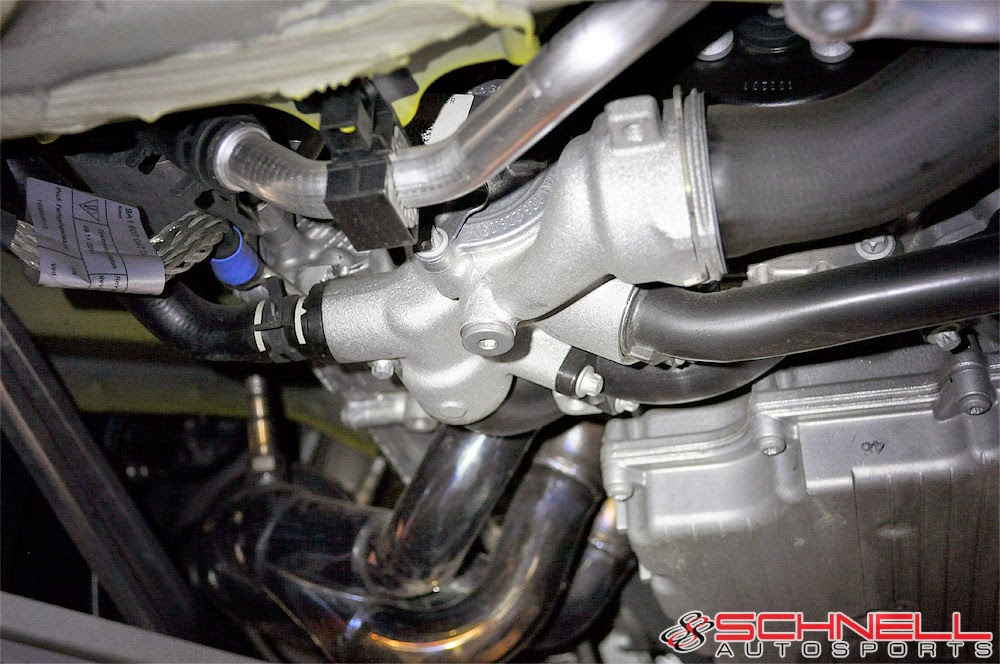 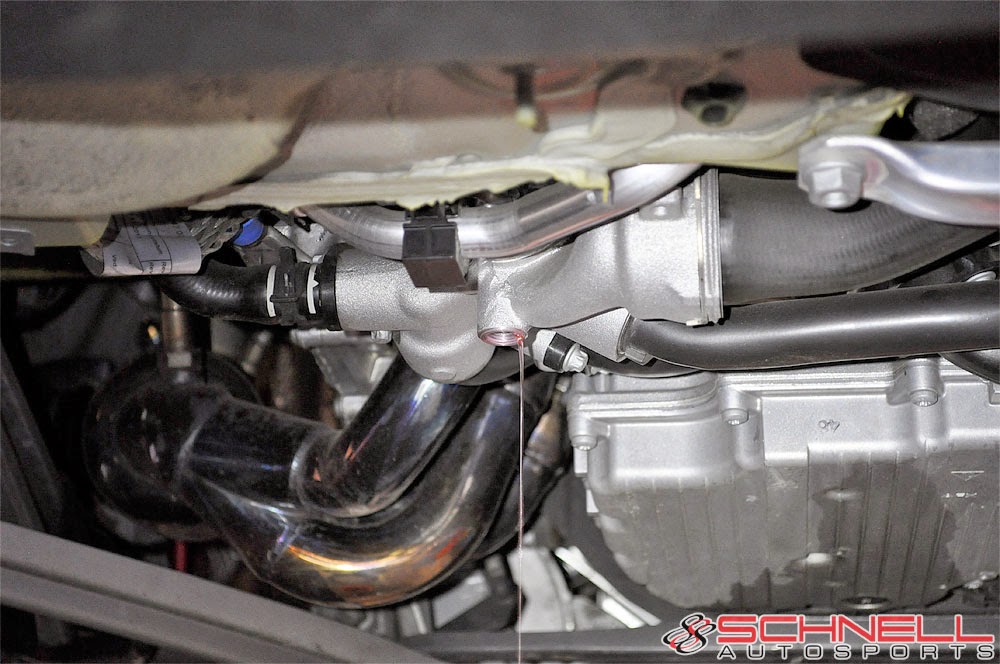 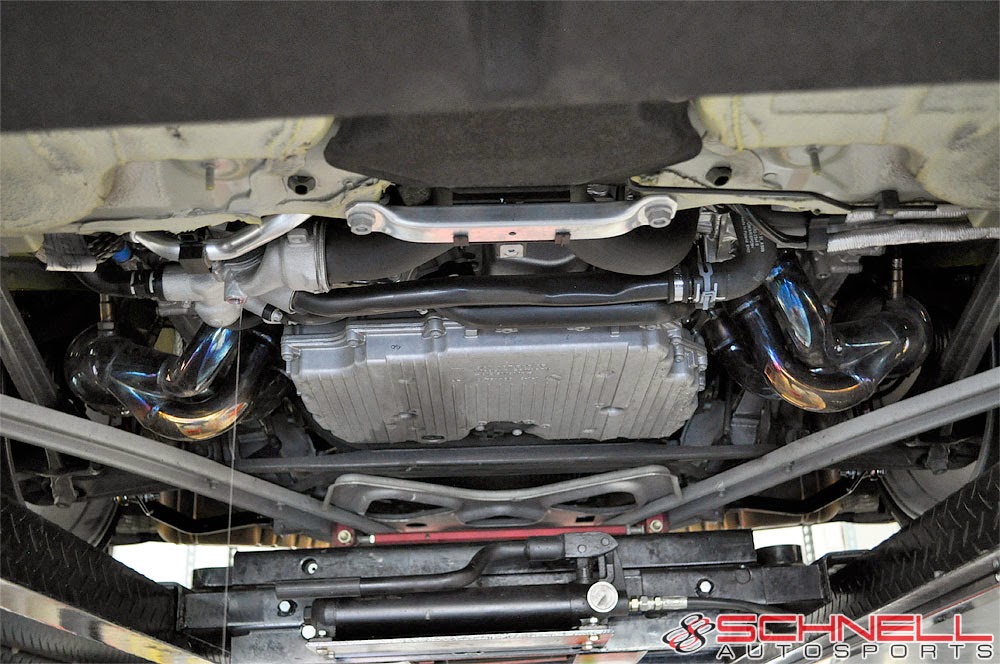 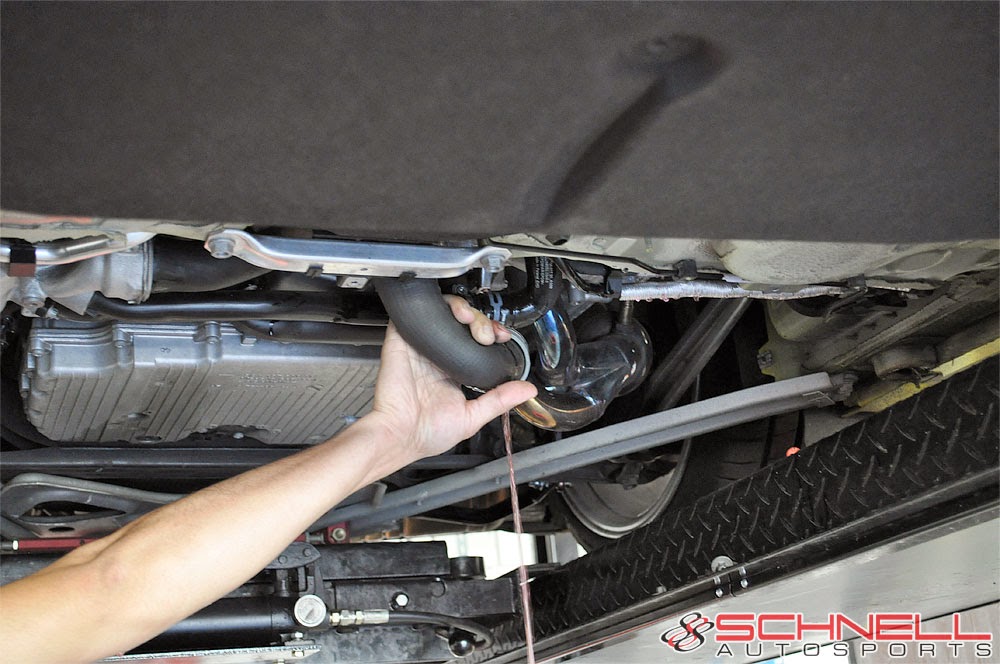 Once the cooling system has been satisfactorily drained, put the drain plug in, and reattach any hoses that you may have disconnected, but do not put the plugs on the side radiators back in place. Where the plugs originally inserted is where the new hoses for the center radiator attach.

The actual process of installing the center radiator is pretty straight forward.

First, mount the retaining frame to the car, and secure using the supplied nuts. The frame can only orient in one direction. 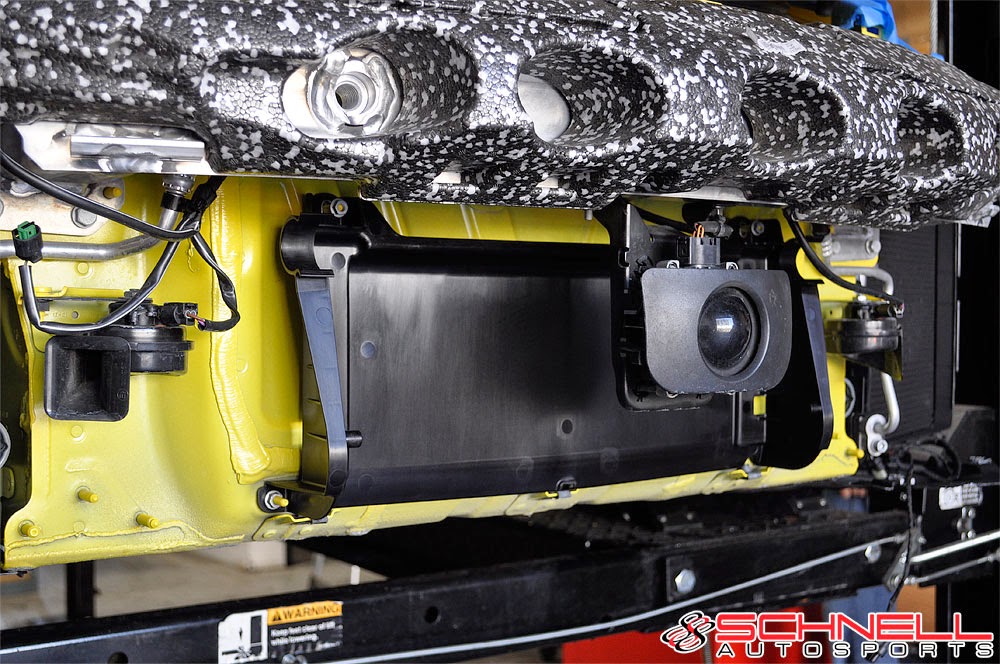 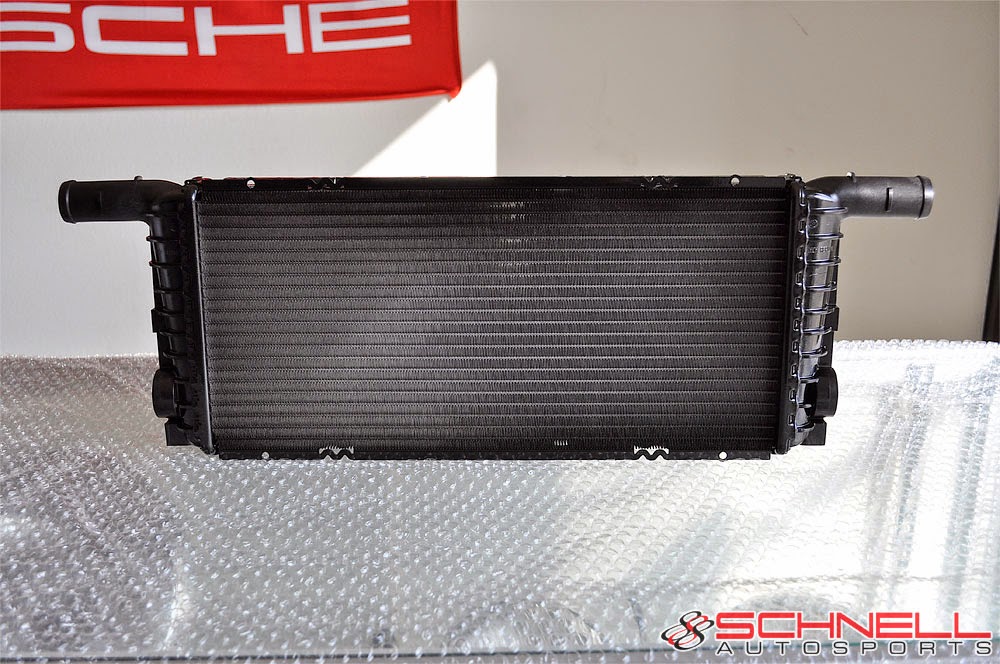 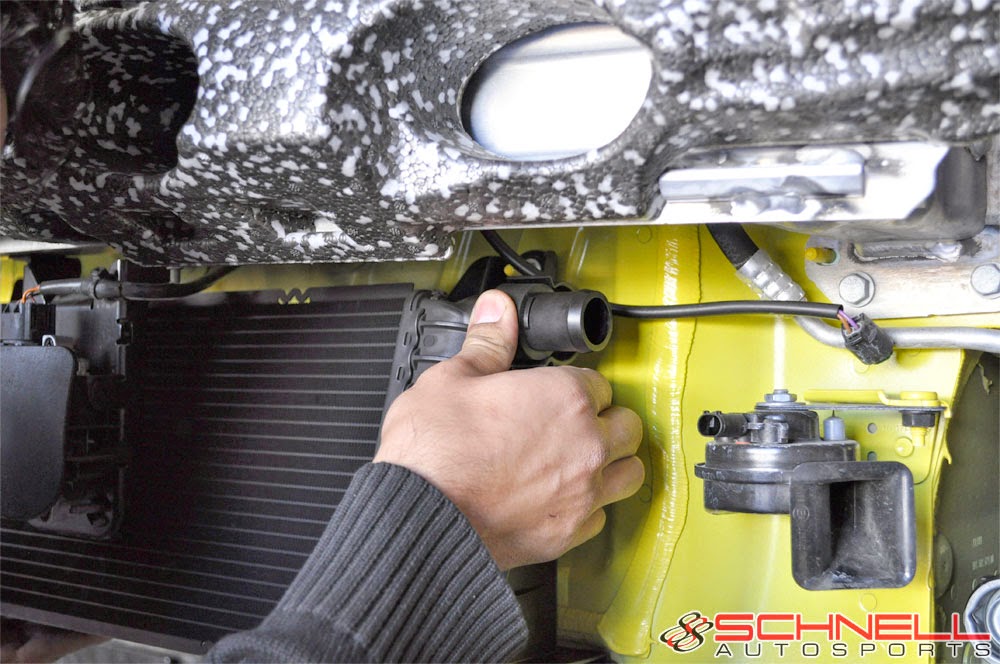 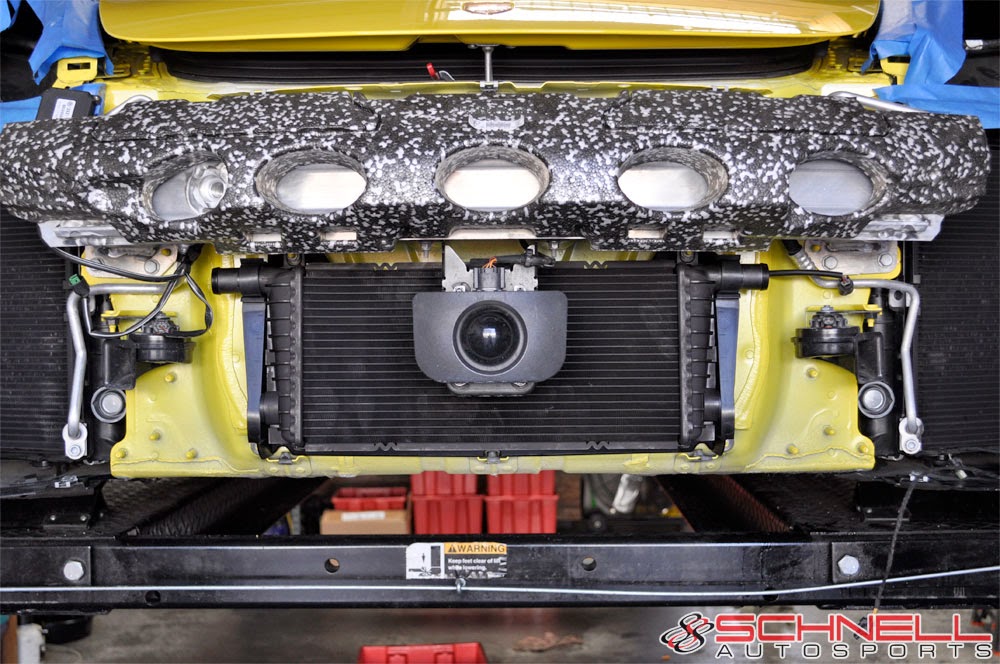 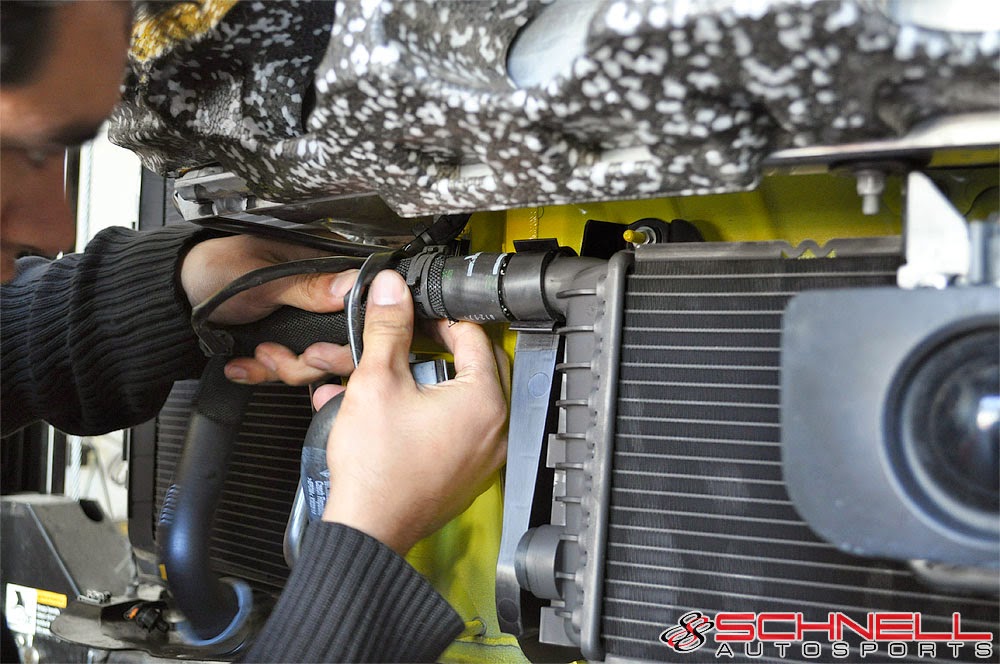 The bottom end of the hose has a fitting that is similar to the plug that was removed from the side radiator, so push the fitting into the hole vacated by the plug until it is firmly seated. Once in place, use the c-clip that you removed earlier with the plug to secure the new fitting. 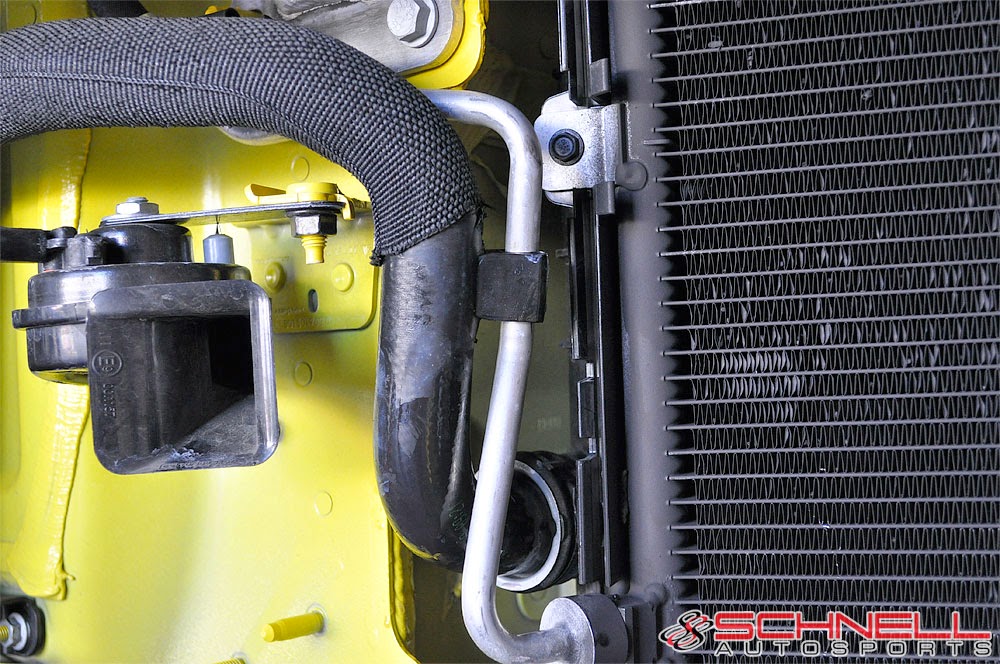 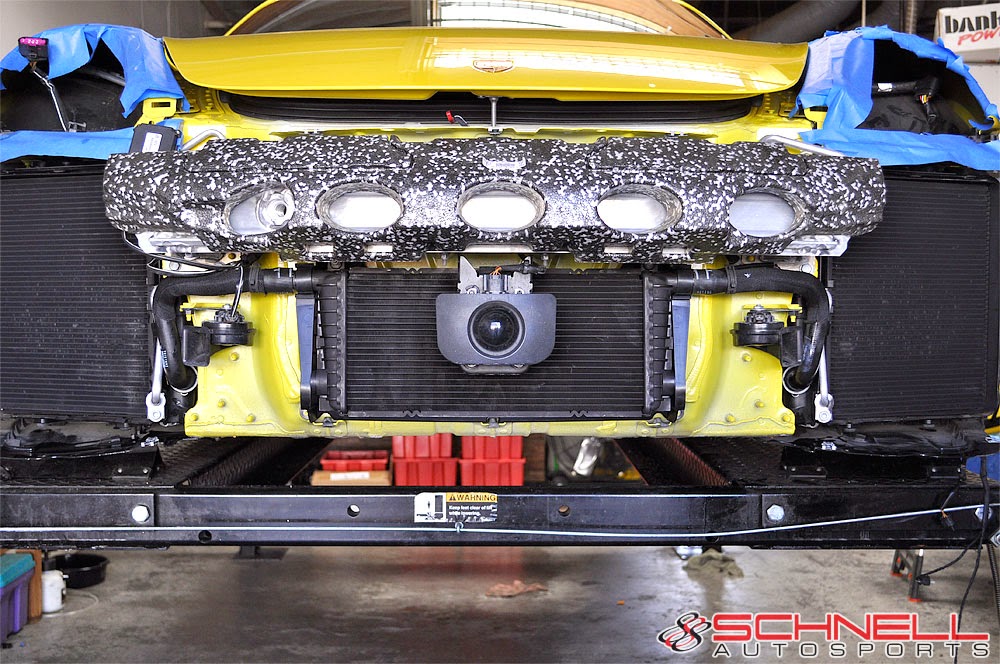 After you've ensured that the hoses are secure, all that's left is to attach the sealing frame to the front of the radiator.
Now that you have the center radiator installed, you have to refill your cooling system. Cars with their radiators located very far away from the engine block (as in the case of the mid-engined 981 chassis) are very susceptible to getting air trapped in the cooling system by virtue of the length of piping and hoses needed to go from the front radiator to the engine.

We highly suggest using the UView Airlift kit for cases like this, because it all but eliminates the possibility of air bubbles getting trapped in the cooling system. It works by first attaching an air compressor to suck all the air out of the cooling system, creating a negative pressure vacuum. Once all the air is removed, the compressor is removed, and a hose is attached that goes into a container holding the coolant that you want to replenish the system with. With the hose submerged, the vacuum is released, and all the coolant gets sucked into the system without any air getting introduced. It's a pretty simple but effective method of doing a coolant refill, and one we prefer to use. 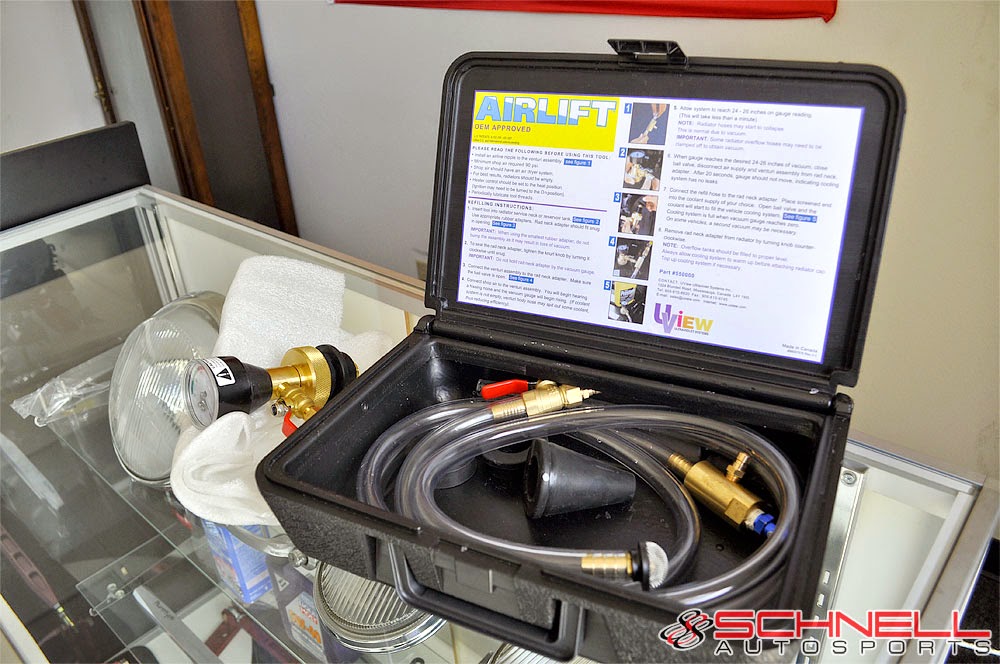 
Once you have your cooling system refilled, and you have checked for any leaks, you're done with the installation of the center radiator.

For the center radiator to work at it's most efficient, it needs the proper ducting so that airflow is directed to all three radiators individually. For vehicles with the "closed" side radiator ducts, you can just reinstall those; for those with the "open" side radiator ducts, you will need to use the "closed" ducting instead. If switching from "open" to "closed" ducts, make sure you transfer over the temperature sensor as well.

You will also have to modify the bottom of your bumper to allow for air that passes through the center radiator to exit the bumper. On the bottom near the trailing edge, there are four rectangular marked areas. 981s that come configured with a center radiator from the factory have those marked areas cut out already, and if you buy an "official" center radiator kit, they will try to sell you a replacement bottom bumper section with those areas pre-cut. As the replacement section is the exact same part as what you already have, just with the holes already cut, you can save a nice chunk of money by simply cutting the holes yourself. A rotary cutting tool makes quick work of the plastic, and you can clean up the edges with a file.

The front of your bumper needs to have the center duct to get air to to go into the center radiator and then out the holes you just cut. There are a few different factory configurations that determine what you have to do for the ducting to fit.

If like us, you have the PAS (as well as PDK), you will have to first remove the stock bezel that is clipped to the frame attached to inside front of the bumper. You then have to cut the new ducting to clear the PAS sensor (and like the bumper, it's clearly marked where to cut), and then snap it into the frame.


With all the ducting in place, you're just about ready to put the bumper back onto the car. If, like us, you cut the zipties that held the wiring harness in place, you'll want to replace those fasteners. If yours was the non-reusable type, carefully pop the fasteners out of their mounting holes (you should be able to get a finger underneath an edge to pry it out), and put the new replaceable one in. If your car came with the reusable type, just insert a new ziptie into the slot in preparation for the harness.

Reinstallation of the bumper is the opposite of removal. It would be best to have an assistant to help you hold the bumper up while you secure the harness to all the connections, as well as getting it secured with the zipties.

Make sure your bumper is properly in position before attaching any screws or clips; the plastic trays underneath the side radiator ducts can sometimes work their way underneath the bumper cover (i.e. not covered by the bumper) during the fitting process, so ensure they are tucked into the bumper where they belong. Also make sure that the bumper tabs are in their appropriate slots in the headlight opening, and in general, check to make sure the bumper is seated properly before securing it.

With the bumper in place, that should be it. You've now got an additional radiator installed on your 981, and you're ready to attack the twisties without worrying about your coolant temperatures. 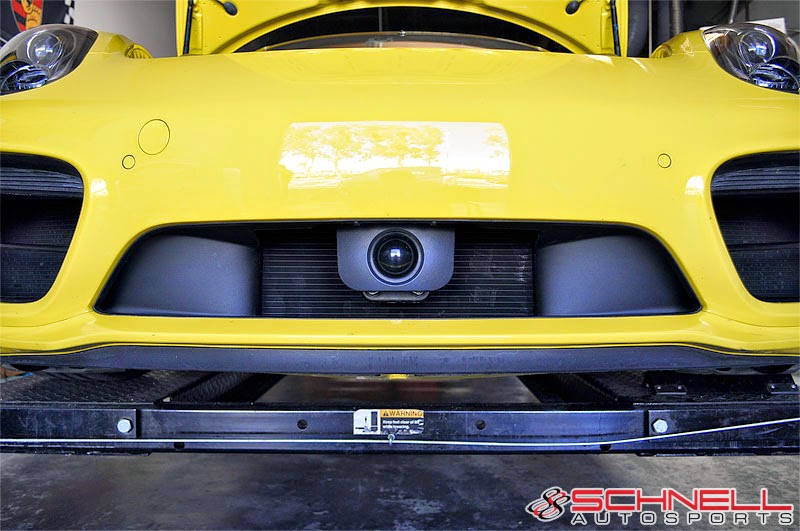