Schnell Autosports Project 1970 911T Targa - Part 2: And I Thought They Smelled Bad On The Outside...

When we last left off, we had just rolled our new project 911T into the shop, and were giving it the once-over to assess how extensive the work would be to get it back into shape. 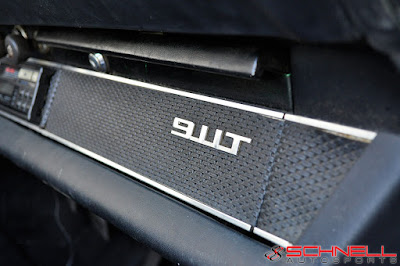 For those wondering if the rough exterior of our Project 1970 911T was perhaps hiding a gem of an interior... prepare to be disappointed. 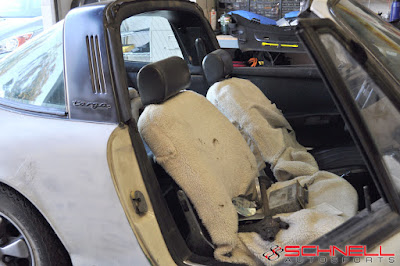 The inside of the Targa had a nice smattering of problems as well. Back in 1970, if you purchased a Conda Green 911, you would get a tan interior. The interior of our car was black... sort of. While we initially thought "I guess they changed out the tan interior to black", upon closer inspection however, it appeared that they used vinyl and fabric paint to convert the entire interior a different color.

When done properly, an interior color change using dye/paint will look like it came from the factory that way. This wasn't done properly.

From what it appears, they used some type of applicator brush to apply the dye to the seats, and in some areas, they missed completely, which created "stripes" of un-dyed upholstery where the original tan color was still visible. Also, their application method left nice streaks of black dye on the inside of the rear windshield, which wasn't an issue only because we knew we would be removing the glass from the car later and would be able to clean it off, but was still an annoyance.

Bad dye-job aside, there were a few other issues to contend with. At some point, an aftermarket radio was installed, alongside an aftermarket alarm system, and both appeared to be rush-jobs made by someone not particularly versed in stereo/alarm installation. Behind the (falling off) carpet in the foot well, there was a rat's nest of multi-spliced connections and loose (or even unconnected) wires branching off to nowhere. 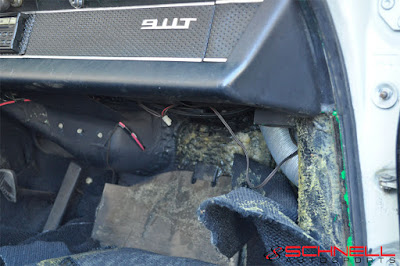 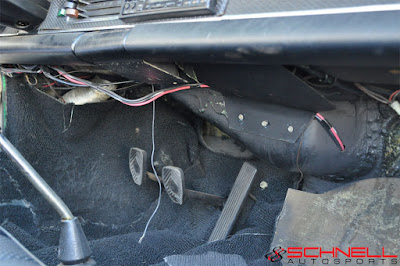 The dashboard of the Targa had also been replaced at some point, swapping out the original dash with a center speaker grill, to one lacking a grill cutout (and also covered with various pieces of adhesive backed hook & loop patches). The rear deck also appeared to have had a speaker screwed into it at some point in time, with the outline of where it was placed still visible, and screw holes piercing the original cover. 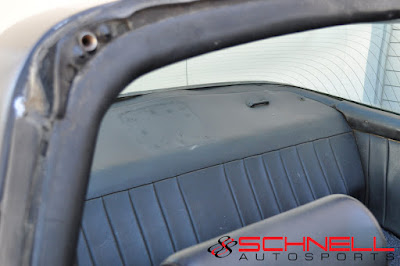 The interior of the Targa was in a general sorry state of affairs, and asides from the actual interior issues, 25 years of sitting in a dusty garage left everything with a layer of dirt and grime that only time and elbow grease could remove.

We knew at that point that we would have a monumental task ahead of us.
Posted by Unknown at 4:25 PM